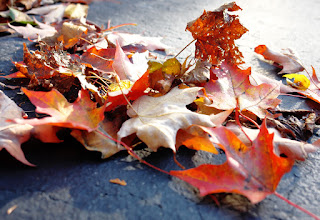 We are enjoying yet another stunning autumn day here in the North of England - it’s cold but crisp, the light has a wonderful slightly honeyed clarity and the pavements are decorated with delicate origami shapes in an array of purple, yellow and dazzling red. For November 23rd this is highly irregular and I'd personally call it the best autumn in memory. The Forestry Commission predicted as much, back in August, when an unusually wet summer gave trees the opportunity to store plenty of sugars in their leaves. The following months have been almost uniformly dry, warm and still - no frosts to kill off the leaves, no water to turn them into mulch and very little wind to blow them away. The results have been breath taking. Autumn has always been my favourite time of year and the kids are used to me staring at the sky a lot and constantly stuffing fine specimens into my pockets to be pressed and displayed at home, but this year I've been insufferable. By rights it ought to be dark and damp and full-on SAD by now, but its almost December and the skylines are still dripping with  iridescent, flaming leaves.

Furthermore, I've just made a thrilling new discovery.
I've always considered part of the autumn beauty to lie in its purposelessness. Like rainbows; and the sea; and the northern lights; and plastic bags blowing around in the wind, -  natural phenomena occasionally move us with beauty that has no reason for being. Nature chucks all of that colour and majesty about the place for no reason at all. If there weren't any people around it probably wouldn't be registered at all. There are interesting questions in the vicinity about why we find such things beautiful....one is inclined to think it must be a side effect, that rainbows for example are beautiful because they happen to involve bright colours and we are attracted to bright colours for some other reason, in some other context (Mohan Matthen talks about these issues and tries to give an evolutionary explanation for our aesthetic sense, if you're interested).

I think that all of the most beautiful natural phenomena have a certain bittersweet poignancy. The eerie sandstone 'carvings' you can find in a windblown desert have a certain austere loneliness about them - a sadness that attaches to the fact that there is no use for them, that all of their intricacy is accidental. Those impossibly playful blossoms of spring that nature hurls at us briefly, only to snatch them away again in mid-gasp. The spring flowers, however, while temporary, do of course have a function.The gorgeous daffodils aren't trying to make me happy, they're just signalling to the bees to come and show them a good time. The flowers make sense.

Now I'd always thought of autumn leaves as one of those lucky side-effects, just a serendipitous (for us) matter of chlorophyll turning into other colours as it degrades when a leaf dies. But it turns out the plot is so much thicker than that!

Its true that the green of chlorophyll usually masks others pigments in leaves, and as the days shorten and the tree starts to grow the corky layer that seals each leaf off at its stem, the production of chlorophyll slows and the leaf gradually loses its green pigmentation. Some pigments are indeed omnipresent in the leaf and the breakdown of the chlorophyll allows them to shine through - yellow flavenoids and lutein, orange carotene, and red lycopene.

But this is not the whole story because there is another highly pigmented compound that is not normally present. Anthocyanin, which has the purple/magenta colour so typical of Maple leaves in Fall, is only produced at this point in the tree's annual cycle. And its costly to produce so it cannot be accidental. It must be serving some purpose for the tree. But we don't know what!!

Like all good conundrums there are some rival solutions. Some scientists think that the anthocyanin acts as a sort of sunscreen  to protect the leaf's cells from occasional sunny days after the chlorophyll has gone. This seems to be a fairly popular hypothesis, but I can't find a good explanation for why the tree would pay to protect its leaves at this point, given that their only future is as mud. Perhaps there is some danger of damage to the DNA that could create a systemic effect before the leaf is properly sealed off, quarantined from the stem.

Another idea, tracing back to Bill Hamilton, is that the tree is producing the purple pigment as a way to signal to insects that they should go find a different place in which to bury themselves for the winter. Because its costly, the anthocyanin would serve as a reliable signal of a tree that is well resourced, and therefore full of pesticides. Just like the bright coloration of poisonous frogs, autumn leaves, on this hypothesis, warn potential threats to nibble elsewhere.

A third explanation posits some sort of allelopathic effect - assumes, in other words, that the production of anthocyanin has some sort of negative effect on nearby rivals of the tree. For example, it might release some sort of volatile compound that stunts the growth of nearby saplings.

I'd be curious to know if there are any parallels between autumn colours and those that we find in another of nature's great artistic creations - coral reefs. Corals also photosynthesize but they shine with a totally distinct colour palette, and I've never heard of their colours exhibiting any kind of seasonal or life-cycle associated pattern. Rather, when photosynthesis shuts down and they die, corals lose their colour entirely - they bleach. Its a very different case, because the pigments that give corals their colour aren't produced by the corals at all, but only by the photosynthetic algal symbiotes that inhabit them. When the corals bleach it's because the algae have gone. Leaves, on the other hand, don't contain any moving parts - the chlorophyll-producers are the cells, and they're locked into position, destined for the ground once their usefulness to the tree has been outlived.

Could it be some sort of suicidal last-hurrah on the part of those cells, some desperate attempt to resist the tree's orders to shut down?

Whatever the explanation, the mystery is the icing on the cake - or rather, the crimson on the tree - for me. These crazy pretty leaves have the gaudiness of a rainbow and the transience of snowdrops and its almost certainly not for nothing - but what, and who, it's for, we just don't know.

Email ThisBlogThis!Share to TwitterShare to FacebookShare to Pinterest
Labels: Biology and the natural world