On the eco-evo-devo of cooperation

To explain the origin of any transition, it is necessary to identify some phenotypic change that brings about a new fitness benefit.
Read more »
Posted by Ellen Clarke at 12:32 No comments:

Congratulations to the awesome Rachael Brown for winning this year's Sir Karl Popper Prize for her paper 'What evolvability really is'.

The BJPS editors say that Brown's paper brings "the  technical, scientific and philosophical features of the issue together in a deft and thought-provoking manner" and "represents an important contribution to the foundations of evolutionary biology."

Posted by Ellen Clarke at 11:18 No comments:

Hangin' out with Jeremy B 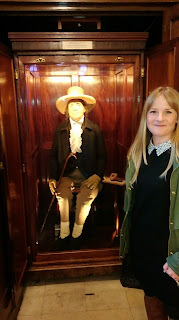 I had a great time at UCL STS yesterday, where I argued that some aspects of bacteriological methodology may be holding us back.  Robert Koch's pure culture laboratory techniques were enormously successful, enabling Koch to take the first steps in defeating tuberculosis, cholera and anthrax and paving the way for the Golden Age of microbiology. But the essentialist and reductionist ontology latent in the Kochian Legacy might be now be impeding further progress in defeating chronic infections, developing new antibiotics and getting a handle on the evolutionary significance of lateral gene transfer.

Other urgent questions we discussed on the day were: Is the legal profession imposing unreasonable demands for standardisation on science? Was it really all Koch's fault? Why did Jeremy Bentham wear such odd clothes? Do parents inevitably catch nits when their toddlers have them? Many thanks to Phyllis Illari, Emma Tobin, Jack Stilgoe, Brendan Clarke, Donald Gillies, Joe Cain and everyone else who came.
Posted by Ellen Clarke at 15:27 No comments:

It is with much sadness that I note the passing of Prof. Werner Callebaut (1952-2014). He was the jovial stalwart of my former workplace, the Konrad Lorenz Institute for Evolution and Cognition Research, Editor-in-chief of Biological Theory, Philosopher of Biology, Riedl scholar and also rather a lot of fun. He worked tirelessly, but he also gave me a taste for slivovitz that I'll never forget and often had a mischeivous glint in his eye as he regaled an audience with tales of philosophical punch-ups.

He will be widely missed by all the young academics whose early careers he helped to shelter and by the international philosophy of biology community in general.

Posted by Ellen Clarke at 12:57 No comments:

'On the subject of bacteriology'

UCL STS London
Posted by Ellen Clarke at 15:30 No comments:


ToddlerCalmTM: A guide for calmer toddlers and happier parents


I shouldn't have bought this book. My amazon app makes it far too easy to impulse buy.  If I'd looked at a big enough picture to have spotted the 'Foreword by Dr Oliver James' on the cover then I wouldn't have gone near it. Doh.