Thanks to the inevitable journal processing time, it *looks* like I've been most busy during this maternity leave, with two papers out recently : )

'Origins of Evolutionary Transitions' is my first ever paper in a science journal, which I'm happy about. You can now read it here.

'The Multiple Realizability of Biological Individuals' was a long time coming. I wrote it the summer of 2011 when I was working in Vienna, although the actual ideas were in place two years or more before that. Curiously, its ended up with an August 2013 publication date although I was still fiddling with proofs in November. Anyway, its all worth it in the end to see it find a home at JPhil : ) You can read it here.

Email ThisBlogThis!Share to TwitterShare to FacebookShare to Pinterest
Labels: Philosophy

Email ThisBlogThis!Share to TwitterShare to FacebookShare to Pinterest
Labels: Astride my virtual soapbox, I'm reading....

Territorial demarcation and the meaning of science

Larry Moran of Sandwalk says that Massimo Pigliucci has nothing to tell him and is on a mere quest for respect when he argues here that the new atheists don't have enough time for philosophy. Moran asks "What "intellectual" or "experiential" way of acquiring knowledge does Pigliucci think will add to the lack of evidence for gods and support of atheism?"

Isn't this just rationalism versus empricism all over again? It sounds rather like Moran is trying to claim that empiricism is all we need. But many people have shown that no pure empiricist strategy is possible. Quine and Kuhn give the arguments viewed as most conclusive. Empirical evidence, observation, data, whatever you want to call it.....these can never inform us about normative questions such as 'what is rational?' We can only do science with the help of rationalist principles concerning what we OUGHT to believe, what extra-empirical properties a GOOD theory should have, what are good norms of reasoning when we choose which part of a theory to take some evidence as having confirmed, and so on. Science is in the business of hypothesizing counterfactuals - 'what would happen if i were to do this or that...' and to make sense of these, of what it means for something to follow necessarily......there is no way that empirical evidence can ever help us understand necessity, lawfulness.

Lots of philosophy does a bad job of explaining why non-philosophers should care about it, because they spend all their time talking only to other philosophers and developing lots of cliquey jargon. But 'there is no such thing as science without philosophy', as Daniel Dennett once said -' only science whose philosophical assumptions have not been spelled out'.

Email ThisBlogThis!Share to TwitterShare to FacebookShare to Pinterest
Labels: Astride my virtual soapbox, Philosophy

Its hitting the fan time

Its not quite proper back to work time yet, but I'm lecturing from next tuesday. Do any of my smart clothes fit me? Can I string a sentence together? Has motherhood made me a more confident person?
Fortunately Orso has been helping me prepare...... 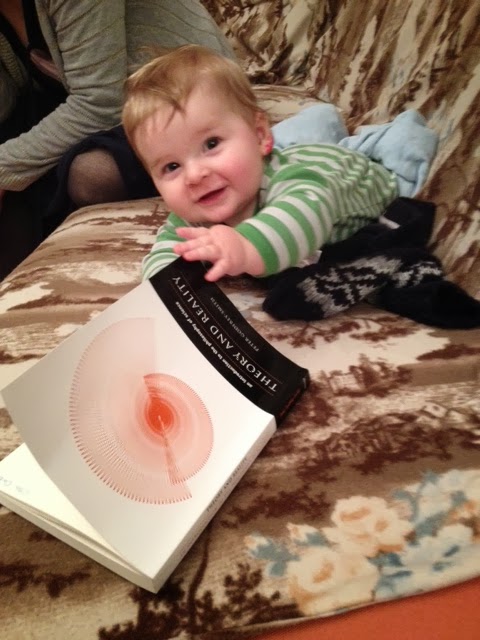 Posted by Ellen Clarke at 08:12 No comments:

I guess training dolphins isn't so easy after all...

Posted this on facebook a couple of weeks ago....

Aaarghhh why has my baby started waking up 5/6/7 times per night?!?

Got loads of helpful tips and support from friends around the world...thanks! Was it teething? Was it a developmental threshold? Too cold? Too many anchovies? "You need to start channeling your inner behaviorist now and realize that it is classical conditioning for a long while from here on out" "Because a child's job is to torture their parents." "they suddenly wise up to the idea that if they wake up more they get more boob time!" "get out the calpol!"

There was a bit of animation over the pros and cons of crying it out "even if you decide to go medieval on him and let him cry until he tires out, as some "methods" would suggest: luckily for parents, children are very resilient, and thus able to survive us!"

I'm very excited to be giving a plenary at this year's Philosophy of Biology in the UK conference, to be held at Christ's College, Cambridge, starting March 31st. The 2012 event was fantastic and I can't wait to see what Britain's philbio-ers are up to this time.

Posted by Ellen Clarke at 15:51 No comments:

If they could choose, babies would probably be happiest dressed in sleepsuits (aka babygros) all day. Stretchy, snuggly, with integral socks and easy opening, they don't impose uncomfortable waistbands or restricted movement on the little wrigglers. Yet for some reason, you will rarely see babies older than three months wearing these in the day time. Instead, you will mostly see babies dressed as miniature grown ups - jeans and woolly jumpers for the boys, dresses and tights for the girls.

Email ThisBlogThis!Share to TwitterShare to FacebookShare to Pinterest
Labels: Astride my virtual soapbox, Parenting

I've been pondering the fact that Orson seems to have a huge capacity for interest in some objects, but a very low attention span for others. Ironically, he is tugging at my laptop cable as I type this, which pretty much summarises the whole issue. Basically, anything that holds my attention holds his.

It doesnt matter how shiny, noisy, complex, expensive etc the thing is. If its a toy, and therefore something that I tend to put in front of Orson,and then try to leave him to it, then he'll play with it for ten minutes if its brand new, five minutes if he hasnt seen it in a few weeks, and 40 seconds if i'm lucky otherwise. His change mat on the other hand, a beige rectangle of padded plastic, is an object of so much ongoing fascination for him that sometimes he sings to it. Its the first and last thing he wants to examine whenever he is on the floor with it and a load of toys. He has equal admiration for my keys, my handbag, my purse, wipe packets, nappies, not to mention the obvious phone, laptop.  I think he'd give anything for a go on my morning cup of tea.

The only thing I can think that unifies these otherwise disparate items is my attention. Apart from lampshades: I have no idea why he likes lampshades so much. But its sobering to think about how much I am influencing him by my choice of activities. It makes me realise I ought to make extra special effort to lead by a good example, to stop fiddling with my phone all day and look at books, people, animals instead.

Posted by Ellen Clarke at 15:24 No comments:

I think my brain has been working as if having a baby is something one does for a year. I have a year off work, playing stay at home mummy, and then everything goes back to normal. But puppies aren't just for Christmas, and babies aren't just for maternity leave. It's dawning on my hindbrain finally that things are never going to go 'back to normal', whatever that was.

2014 is going to be the year of carving out a new identity for myself as mother and academic. From what others say, I'm bracing myself for at least a period of feeling I'm failing at both. So my new years resolution this year?

Try not to let guilt get the better of me. I'm looking forward to having some time for the sort of cognition our animal cousins probably don't share for a change. And I'm looking forward to everything Orson might do and bloom into as the year unfolds (not that he hasn't already scaled the highest heights of perfection!)

Happy new year y'all, I hope your next year makes you as happy as 2013 made me!

Posted by Ellen Clarke at 20:15 No comments: