Oliver James, a clinical child psychologist of unashamedly psychoanalytic bent, categorises mothering styles into three types, and offers advice on how to make the best job of mothering within the constraints created by each style. There is the Hugger - who is most generous and loving towards her baby, the Organiser - who prefers older children and finds the early years a challenge, and the Flexi - who chops and changes between both. In a nutshell, the best way not to f*** them up is to be a Hugger, and if you're too damn selfish to manage that, then make sure you get a top of the range nanny!

You might guess that I wasn't the most sympathetic audience. I'm disappointed by this, since I like James' Guardian column (no wait, that's Oliver Burkeman!), and I'm generally a right sucker for self-help psychobabble.

Email ThisBlogThis!Share to TwitterShare to FacebookShare to Pinterest
Labels: Astride my virtual soapbox, I'm reading, Parenting

I thought 'cheap' and 'eco nappies' were three words unlikely to go together. My conscience is incrementally lightened, however since I've found some. Fifteen pounds for 80 moltex no. 1 nappies, from amazon. They're chlorine -free, made from 50% renewables, and biodegradable. What's more, they work! No leaks so far, which is more than I can say for any other brand.  I suppose you could be really good and get them from somewhere other than amazon, but here's a link anyway
http://www.amazon.co.uk/Moltex-Nature-Nappy---Pack-Nappies/dp/B00B8RYT24/ref=sr_1_1?s=baby&ie=UTF8&qid=1377890312&sr=1-1&keywords=moltex+midi+80
Posted by Ellen Clarke at 20:21 No comments:

Email ThisBlogThis!Share to TwitterShare to FacebookShare to Pinterest
Labels: Astride my virtual soapbox

Now we just need to teach him how to do the washing up...... 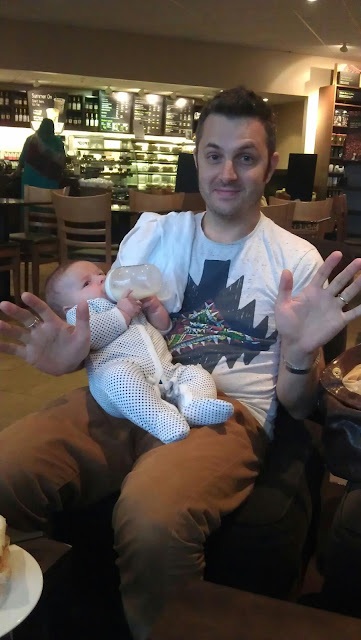 Posted by Ellen Clarke at 16:51 No comments:

I'm having the realisation that my attitude is going to have to change.

Gopnik makes the interesting argument that the ability to carry out counterfactual reasoning - i.e. thinking about things that are false or counter-to-fact - is *the* distinctively human capacity, which has underpinned our huge success as a species, by enabling us to make plans and come up with ways in which we can modify our world. By thinking about ways the world could be different, we can anticipate the future and formulate ways to modify that future, by constructing tools and so on.

Furthermore, contrary to older theories in which children were viewed as basically stupid adults (Piaget), Gopnik argues that when it comes to this most important cognitive capacity - counterfactual reasoning - children and even babies are out in front. This is best demonstrated, she argues, in their vast capacity for imaginative play. Adults, in comparison, are severely limited beings, with far fewer neuronal connections as a consequence of all the pruning that goes on in adolescence, and are therefore much less able to think outside the box.

Rather than viewing children as adults in the making, Gopnik argues that adults basically exist in order to enable the existence of children and babies who, though very vulnerable and dependent in terms of basic needs, are essentially the 'R and R' department of humanity, without which we would be stuck eking out an existence by trial and error learning like our chimpanzee kin. Without childhood, she claims, we would have no cultural advances, no ability to radically construct the world we live in according to our needs.

Posted by Ellen Clarke at 22:06 No comments:

Pregnancy has sparked in me a newfound interest in catholic art! Well ok, in representations of the Madonna and child more exclusively. Its suddenly rather gratifying to reflect on the extent to which western civilisation has deified the mother-baby relationship, especially in southern europe.