In praise of an unkempt garden 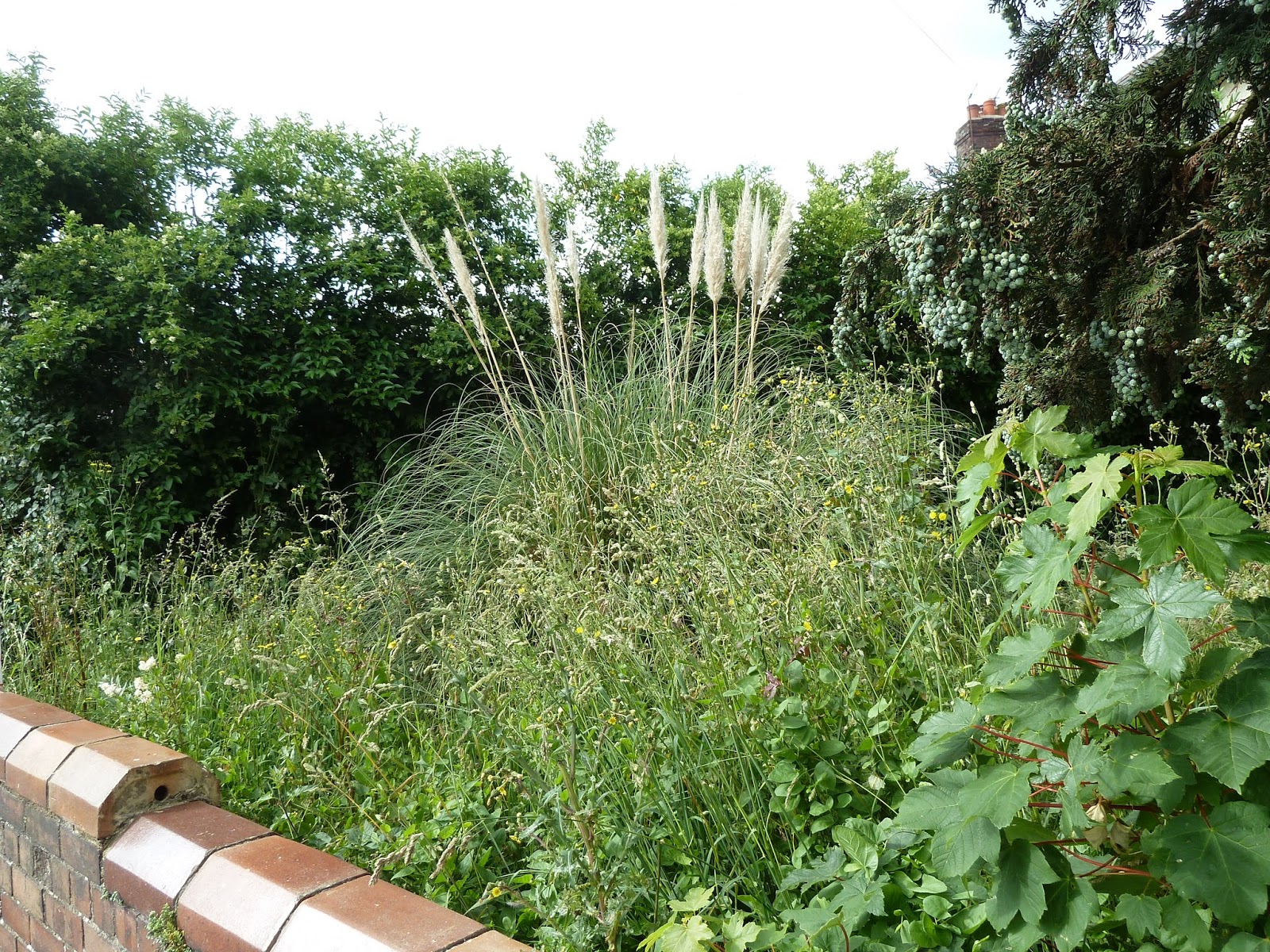 There are plenty of houses, in the transitional area of Oxford where I live, whose gardens are what some would call anti-social. Lawns uncut all year, rubble piled up, weeds taking over and generally making the property appear vacant, unloved and unfriendly. At least, this is the typical societal attitude towards such gardens, I think. More careful, considerate homeowners keep everything neat and tidy, which makes the whole street feel safer, keeps house prices higher and generally pleases those inclined towards neighbourhood-watch stickers in their windows. Unkempt houses make a house look empty, which implies no one wants to buy it, which will depress all the prices. Or like it might be occupied by squatters, who are terribly dangerous. Or, worst of all, like students live there.

So there is tremendous pressure, especially in better-heeled parts of the country, to tend to your garden dutifully, to make it look smart, look orderly, look, above all else, like its under control.
I think it’s time someone came to the defence of the chaotic, the wild, the unkempt garden.

In part my motivation is aesthetic. I just think there is something a bit sad, a bit limited, about gardens in which there is not a leaf out of place. Lawns that are so buffed and mown they resemble astroturf. Plants displayed as objets, as organic scatter cushions, with a total disengagement from the fact that these are living organisms, that they have needs. I've much sympathy with George Monbiot in preferring my nature a bit more natural, a bit surprising, a bit edgy. But I also think the aesthetic case can be backed up with an appeal to conservation.

I'm not sure what the consensus is on how to define conservational goods. We hear the word biodiversity used a lot. I'm dimly aware that keystone species are thought to be important. And even more dimly aware that one reason to defend diversity is the idea of maintaining a genetic storecupboard of species that just  might come in handy one day. This is an area i'd really like to become knowledgeable about some day. In lieu of that day, I'll just claim that there has to be some benefit to leaving nature to do its thing sometimes, in at least some small corners of our planet.  And that the gardening industry, in encouraging homeowners to spray chemicals everywhere, maintain sterile soil, implant greenhouse-grown bedding plants according to the latest gardening fashions is not good for the environment. Gardening is a passion deeply rooted in our intrinsic feeling of entwinement with the natural world, but its been contorted by consumer mechanisms into a shallow, plasticky hostility to life.

I don't know if anyone ever tried to calculate how much acreage of land is contained in UK domestic gardens (God I love the internet. Of course they have.  It's 432,964 hectares, apparently. But I don't know how many of these qualify as 'kempt'). I know that farmers hedgerows at some point gained recognition as valuable pieces of ecosystem. And starting in the late 90s, the UK government began encouraging wildlife gardening, in appreciation of the impact domestic gardens can have on conservation goals.  The idea here is to introduce plants and habitats into your garden that are hospitable to our wildlife, especially endangered wildlife. Suggestions include providing nesting boxes, hedgehog homes, and logpiles, as well as encouraging the sorts of plants you won't see for sale in your garden centre, such as nettles, brambles and ivy. The rationale for the latter is given in terms of animals they feed or provide habitats for.


I'm all for this advice, it's great. Everyone can have a little logpile for stuff to live in. Let a corner behind a hedge fill with weeds. Yet I still wonder if the most wildlife and conservation-friendly garden is not just the *ungardened* garden. Unkempt gardens are totally organic - no chemicals sprayed. No compost bin releasing methane. No carbon footprint via exotic imported plants. No cutting down trees because they're blocking the light. Admittedly a decomposing bed might release toxins, so using gardens as rubbish dumps is not cool.

My point is that disorder is way better at preserving diversity than we are! If we control everything then the outcome will only be as successful as our theories and models are correct! Tha'ts not a bet I want to take.


An outstanding problem for the concept of unkempt gardens, however, concerns demon weeds. These are introduced, non-native species that have a nasty habit of outcompeting everything in their path when they find a nice comfy foreign niche. UK examples include Himalayan knotweed, Indian balsam, rhododendron (curiously these are all from the Himalayan region whose climate is rather similar to ours, which is why apple trees do rather well over there) and water hyacinth. These plants are bad news for the environment because they reduce biodiversity, pushing out native species and turning gardens into monocultures.

There is a surpising analogy to be drawn between good gardening and good politics here. Too much manicuring = too much state intervention, the nanny state. Problems arise in the long term here because the gardener/government may not always know what is best for the long term interests of the garden/people. Too little gardening = globalisation, the grip of monopolies. Intervention is required to break up the cartels and preserve diversity.

Of course its important to save our forests, to worry about floodplains, and so on. Maybe we should ban the sheep and rewild the moors. But charity starts at home, they say. Let's start embracing the conservation capital that many of us are lucky enough to have and rewild our gardens. We don’t need to be crazy about it: I have a son, I'm not going to let it all pile high with nettles or blackberry thorns. Some people will still want prettiness, flowers etc. Everyone is entitled to a duck-shaped hedge if they want one. But im going to nurture the plants that are already there, promote gentle competition between them, foster life! Allow natural processes of local competition to take over.
Above all, I say it's time to change society's attitidues to unkempt gardens. Let's stop berating overgrown gardens and the students that produce them. We should embrace these oases of disorder and recognise the good they do for local nature, for flood-risks, for the planet. Pouring concrete all over your front garden and parking a car on it: THAT'S anti-social.

Let's celebrate the little local wild patches we can enjoy and the benefits they bring to all.

Email ThisBlogThis!Share to TwitterShare to FacebookShare to Pinterest
Labels: Astride my virtual soapbox, Biology and the natural world