I'm feeling very bored today and I feel bad about it. Didn't get a great deal of sleep last night, and today I just don't have the energy or enthusiasm to think of anything to do, except plonk Orson underneath things and wish he'd stay there quietly without me. Wish he'd stop becoming unhappy exactly when I start doing something else. Wish I had time to do all the things that used to make me me...read a book, write some philosophy, post more than three sentences at a time on this blog.........

Poor little mite had his second lot of jabs today so he's not feeling at his best either, and of course it isn't his fault i'm tired, so i feel terrible that i can't muster more .......more mummy for him. I can't think of any songs to sing or games to play. I just desperately want to put some ear plugs in and lie down and go to sleep.

How do other mothers cope with this? I need some ideas on staying sane, on sneaking in me-time, on finding low-input ways I can keep him happy. Lazy mama?
Posted by Ellen Clarke at 16:53 No comments:

The office of a philosomama 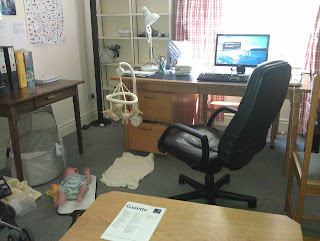 Posted by Ellen Clarke at 11:29 No comments: 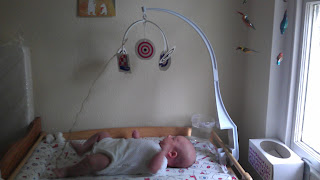 Watching Orson learn that he can influence his world, and how, leads me to reflect that life is really all about learning about control. As I've got older I've decided happiness comes with learning what you can and cannot control, and letting go of the latter.

Email ThisBlogThis!Share to TwitterShare to FacebookShare to Pinterest
Labels: Astride my virtual soapbox, Parenting, Philosophy

Just entertained orsolo for an hour and a half with a scrunched up yorkie wrapper. Best toy ever for only 60p. And mummy got to eat the yorkie ;)

Posted by Ellen Clarke at 18:38 No comments:

Orson is 10 weeks old today. Furthermore, he's around a year old this  month!
That is, it's a year since he started growing and developing inside me :)

I realise old habits die hard, but in some ways its surprising that we still measure peoples age from the date they were born, rather that from when they were conceived. Obviously, back in the day the precise time of conception was unknown (still is to some extent). But its funny to still use this, even though whether a baby is early or late has huge consequences for when it will reach its developmental milestones. I think of Orson as a week older than his birth date, as he was a week late, and arrived with loads of hair and bath-wrinkled skin. But I've known him loads longer than 11 weeks, most intimately!! I even recognise some of his traits - lying on his left side, staying up late - from before.

And of all the developmental thresholds he has crossed in the last year, swapping water for air is just one among many.
Posted by Ellen Clarke at 11:08 No comments:

The joys of summer

I am full of the joys of English summer today. Sunlight filtering through the leaves in the park, kulfi bought at the local grocer, the smell of cremated chicken wafting gently on the breeze. I love that English people go so mad when the weather is good. That a sunny day is a valid reason for skiving off work, that the shops instantly sell out of disposable bbqs, that the streets fill up with people with a variety of odd patterns stenciled on their bodies in white and red. That we just can't handle it basically, we get over excited and drink too much and collectively lose the plot.

In countries where they have summer every year nice days are rubbish (unless you're English and on holiday in them of course.) The folk don't know how to enjoy themselves. They treat it like any other day (which it is). They even go to work for gods sake. Such days are wasted on them. *smugly licks ice cream*
Posted by Ellen Clarke at 08:31 No comments: