I was having a conversation with someone the other day about how at All Souls College they sing a bizarre song about a mythical duck,
the chorus of which is a supposedly bawdy verse about how well-endowed the duck was. I never could help interrupting this somewhat smug celebration of a big dick by telling the men around me that real mallards do indeed have large penises, but they're also notoriously weird penises, all corkscrew shaped and twisty. They evolved their bizarre structure in an evolutionary arms race with female ducks, because the females have evolved bizarre corkscrew shaped vaginas in a failed attempt to prevent the males from habitually gang-raping them. Oh and the penises fall off at the end of each mating season.

It usually got the bawdy off their faces quite fast. My recent and savvy interlocuter objected that if ducks have such odd and large penises how come they're not a common sight, and i didn't have a good response at the time.

In case you can't decide what's weirder - the actual penises, or the fact that Oxford Dons are in the habit of singing about them -  i'll share with you the fruits of my search:


The bird in the video is a muscovy duck, but here is a true mallard with his penis not-yet inverted (ie still hanging out) after a copulation: 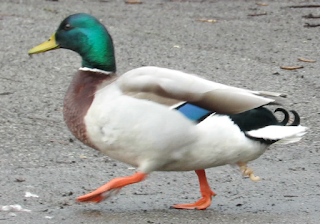 (Answer: its the actual penises)

Email ThisBlogThis!Share to TwitterShare to FacebookShare to Pinterest
Labels: Biology and the natural world